The payment services company beat on fourth-quarter earnings and sales, but its first-quarter revenue forecast fell short of expectations.

The poor earnings report “certainly dents the prospects,” Blue Line Futures President Bill Baruch told CNBC’s “Trading Nation” on Wednesday evening. However, there are a few technically bullish patterns forming, especially if the stock repairs the damage before the end of the week.

“There’s room to run here, and what I’m watching most closely is you have the 50-day moving average sneaking up on the 200. Looks like it’s going to cross over and give you the golden cross and provide further bullish momentum,” Baruch said Wednesday before the earnings release.

A golden cross is formed when a shorter-term moving average such as the 50-day moves above a longer-term trend line such as the 200 day. The technical move suggests accelerating bullish momentum.

“What stands out most is the ascending triangle, which it is trying to break out above,” said Baruch. “The close above there is also very bullish.”

Shares of Square were sitting at the top line of that ascending triangle pattern at $79 at market close Wednesday. A move above signals a breakout from a consolidation pattern. 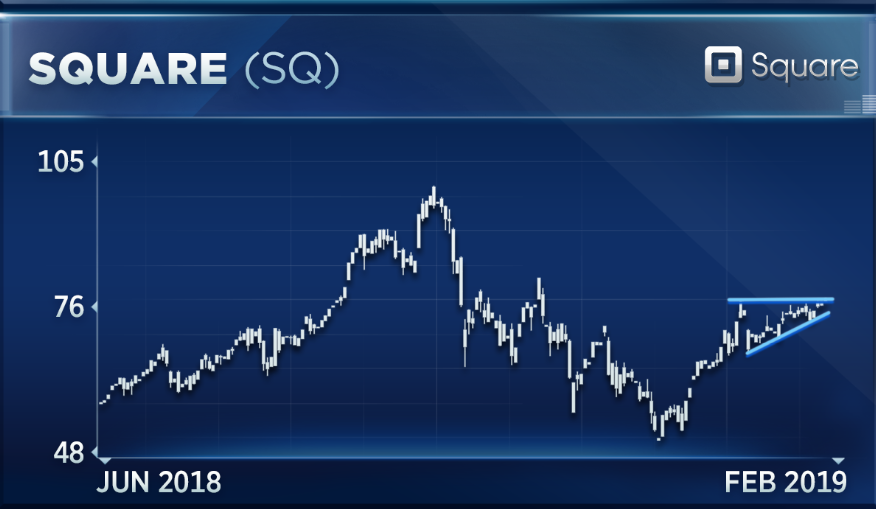 Stacey Gilbert, head of derivatives strategy at Susquehanna, and Susquehanna analyst James Friedman have a more cautious view on the stock. The firm has a hold rating and a $77 price target, more than 2 percent below Square’s current price.

“It is a hot space, and there is increased competition. If you look at a name like Clover from First Data, this is competition that’s coming into this space that does make us concerned for the longer term,” added Gilbert. “Yes, the concept is great, but we do have some caution around it.”

Square has an average overweight rating and $79.59 price target, according to FactSet estimates.

Disclosure: Susquehanna is a market maker in and Susquehanna and/or its affiliates beneficially own 1% or more of the securities of SQ.